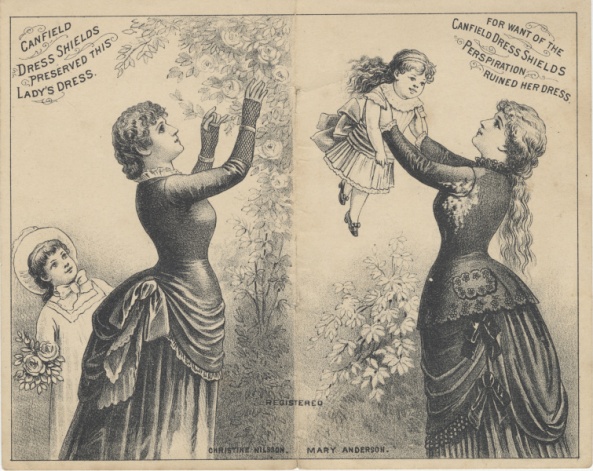 Though all humans perspire, it appears that only women in the Gilded Age had to attend to the dainty task of pretending not to sweat—er, glisten. And the Canfield Rubber Company profited. Incorporated in 1885 and doing business at the corner of Railroad Avenue and Myrtle Street in Bridgeport, the company’s forty laborers who, we suppose, sweated as they made millions of dress shields for sale in the United States and in Europe.

Although we may titter, giggle, even chortle at the idea of dress shields in our age of deodorants, antiperspirants, and body sprays, imagine a time when doing laundry was an all-day chore—one that, if wealthy enough, a family would quickly outsource. Catharine Beecher’s popular Treatise on Domestic Economy (1841) features three chapters on laundry alone. Her younger sister, Harriet, considered laundry a “weekly affliction.” The weekly wash required, per type of clothing, one wash or presoak, one boiling, and one rinse, all without running water and electricity. Historian Susan Strasser, in her book Never Done: A History of American Housework, estimates that each wash required about fifty gallons of water, all to be pumped, lugged, poured, heated, adulterated with lye soap and bluing, and discarded. And we are, most definitely, not talking about one wash, but several over the course of what became known as “blue Monday.”

We won’t even begin to discuss ironing. Little wonder, then, that dress shields were so widely used. Canfield’s version was touted as healthful, comfortable, and washable—more easily so than an entire garment. And Canfield’s patent took advantage of another patented process developed in Connecticut, this time by Charles Goodyear: vulcanization, which rendered rubber pliable and able to be molded for a variety of goods.

Trade cards were portable advertisements handed to customers at a variety of stores. Featured on the foldout card featured in the trade card above are Christine Nilsson and Mary Anderson, the former a famed Swedish soprano and the latter an American stage actress. Though your ECHO staff cannot imagine a modern celebrity (besides maybe Courtney Love) signing on to sweat publicly as a spokes model for a product, we also know that many celebrities’ images were used without their permission in the late nineteenth century.

Any questions? Raise your hands.