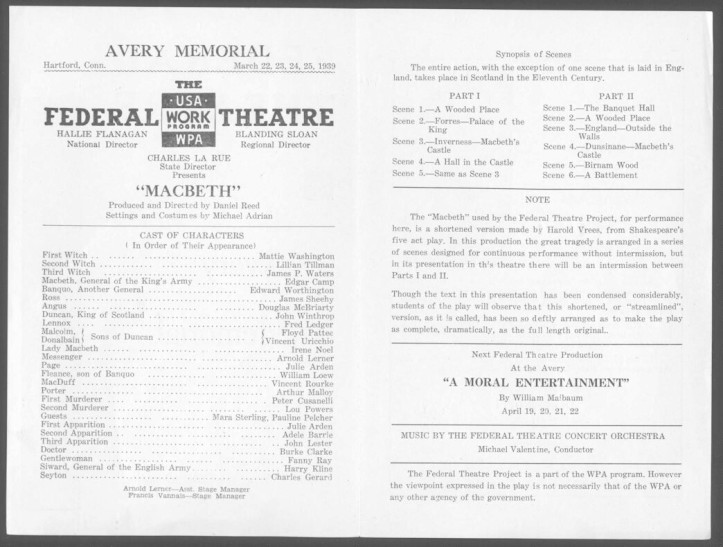 In the last two weeks of July 1936, theatergoers in Bridgeport and in Hartford experienced the stage tragedy Macbeth in a sensational new way. Set in Haiti during the Napoleonic Wars, this innovative version of Shakespeare’s classic, directed by a 21-year-old upstart named Orson Welles and produced by John Houseman, featured a big cast, orchestra, and stage company. All were members of the New York Federal Theatre Project. All were members of the Project’s Negro Theater Unit, based in Harlem. All were African American.

This “Voodoo Macbeth,” as it was called, had enjoyed a standing-room-only, ten-week run in New York City before heading first to Bridgeport, and then to Hartford. The Hartford Courant reported that this production was “precedent-shattering” and had been “acclaimed by critics as the most unusual and successful production of a Shakespeare play in the past hundred years.”

One of the reasons the play came to Bridgeport and Hartford is that each city boasted active Federal Theatre Project units, including a Negro Theater Unit in Hartford. FTP units performed classic and popular plays, but also created “Living Newspapers,” plays about contemporary social and political issues. Only four or five Living Newspapers were created by Negro Theater Units through the nation; one of these, entitled Stars and Bars, written by Ward Courtney in 1938, interrogated the historical and contemporary conditions of African Americans in Hartford, including the racism of the city’s officials. No record of the play’s performance exists, and it may have been the play’s explicit discussion of racism that caused it to be shelved.

This year marks the 75th anniversary of the Works Progress Administration, part of President Franklin Delano Roosevelt’s New Deal to put Americans back to work during the Great Depression. Though remembered for public works projects requiring pickaxes and shovels, many WPA projects required greasepaint and costumes, or typewriters and cameras, or canvases and easels. Connecticut’s WPA was particularly active. The WPA undertook wide-ranging research on the state’s history and culture, and in a way the Encyclopedia of Connecticut History Online is doing the same.

Image courtesy of the Library of Congress.

Four minutes of scenes from the New York production of Macbeth may be viewed at the 11:07 mark in We Work Again, a 15-minute documentary film produced by the WPA to chronicle the New Deal’s successes in putting African Americans back to work.

Under the aegis of State Archivist Mark Jones, the Connecticut State Library is compiling an inventory of all Federal Art Project artists and their work. The General Assembly appropriated $150,000 for this inventory, for which Jones serves as project coordinator. More information is available at http://www.cslib.org/archives/wpaartannounce.htm