August Hutaf’s recruitment poster for the US Tank Corps quickly attracts the modern eye. A fierce black cat virtually attacks the viewer. Behind the cat a sky glows in fiery orange and yellow. Below and behind the cat is the firepower the new Tank Corps would bring to World War I. The first words one reads–“TREAT ‘EM ROUGH!”–are set apart by black-outlined white lettering in the upper left corner.

Though it was organized in November 1917 (assigning as its first officer George S. Patton, right), the Tank Corps’ first battle was at St. Mihiel on September 12, 1918. Hutaf’s poster, commonly mis-dated 1917 in museum and library catalogs, was not printed until late September 1918. The poster, entitled The Spirit of the Fighting Tanks, was noted in the nation’s newspapers on September 20.

So, yes, dates ARE important! The Army initiated a recruitment drive for 10,000 men in April 1918 and again in October 1918, when the Fourth Liberty Loan was also underway; Hutaf’s poster, likely the result of the latter effort, also appeared once American tanks had been battle-proven.

Hutaf’s poster is based on the Tank Corps’ (originally 65th Engineers) mascot: “a coal-black tom-cat,” newspapers noted. “With tail and back erect, and looking for all the world like fury incarnate, the black tom-cat is seen in recruiting posters as aboard the top of a tank turret” (“War’s Great Weapon–The Tank,” The Buffalo [New York] Times, October 27, 1918, p. 47).

Philadelphia cartoonist and Tank Corps member Joseph Cunningham created the design in February/March 1918. Cunningham was also credited during World War I with originating the Corps’ slogan, “Treat ‘Em Rough!” Cunningham’s image was readily copied. Sgt. Henry E. Clark created a recruiting poster based on this design. Rico Tomaso adapted the design to the 1918 sheet music cover of Treat ‘Em Rough, in which the black tom-cat is attacking a Pickelhaube-wearing German eagle. 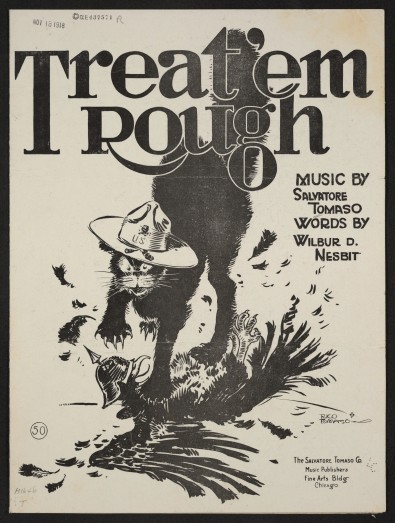 As the Tank Corps’ mascot was rolled out for the public, newspapers detailed the International Workers of the World’s “sab-cat.” Created by IWW member Ralph Chaplin, the “sab-cat” was a “silent agitator” for labor strikes and acts of sabotage.

The Oklahoma Historical Society’s exhibition, World War I and the Art of War, includes a discussion of the Tank Corps’ adoption of “Black Toms” as a nickname, stating that the Corps took it on as the “personification of revenge” after the July 30, 1916, German sabotage of a munitions depot on Black Tom Island in New York. I have found no evidence to support this connection. Yet poster artists were receptive to events and popular sentiment, interpreting in text and image and design responses, retorts, and amplifications.

First, how did government react to competing imagery and messages, especially in instances in which the images and symbols used were similar and emerged in the public eye at the same time? We know that “sab-cat” stickerettes were placed over recruitment posters; such acts were considered unpatriotic. In the “battle of the fences” waged with images, how did George Creel’s Committee on Public Information respond? In other words, how might we read some choices of images in government-approved propaganda posters as reacting to other images?

Think, for example, of H. J. Glintenkamp’s drawing of a broken Liberty Bell in the August 1917 The Masses (below, left) and the government’s theme for the fall 1917 Second Liberty Loan, “Ring It Again!” (below, right). This untitled cartoon was listed as evidence to prosecute the journal under the Espionage Act, effectively bankrupting the radical magazine. 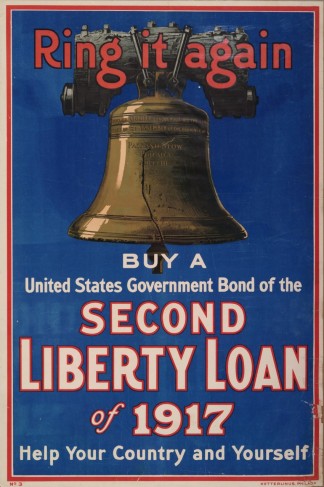 I haven’t a firm answer to these questions. Given that message control is vital to successful propaganda, I believe it’s useful to investigate the question further.

Part of the investigation requires us to consider how these images incorporate ideas about gender. Cats—and black cats in particular—have long been associated with women and with witchcraft. The “sab-cat” acted slyly and surreptitiously, destroying property seemingly by magic. That the Tank Corps distinguished its symbol as a “tom-cat” is thus an interesting shift.

So it’s fascinating to consider the relationship of the Tank Corps symbol to its motto. “Treat ‘em rough!” seems a thoroughly modern phrase, but it is one that had been appearing in popular magazine and newspaper descriptions of the “modern caveman’s” treatment of women, from nonchalance to physical violence. In these stories, women were always at fault: “She wanted conquering, and he clubbed her. She sought mastery and got maltreatment.” (“The Caveman of Yesterday Is a Failure as a Husband of Today.” Atlanta Constitution, January 28, 1917, p. 4.)

Novelist Sinclair Lewis employed the longer, well-known phrase in his 1920 satire Main Street: “The way to handle wives, like the fellow says, is to catch ‘em early, treat ‘em rough, and tell ‘em nothing!”

Artist John Held, who would achieve popularity for his cartoons about flappers and sexual mores in the 1920s, offered this “treat ‘em rough” statement in the center panel.

One stanza of the “Guardhouse Blues,” chronicled by the Atlanta Constitution at the  camp in Macon, Georgia (Camp Harris), in July 1916, uses the phrase:

Votes for the women,

Don’t fall for that stuff;

You can’t pet a woman,

So, the “’em” in “treat ’em rough” referred most often, in my admittedly cursory research, to women.

Another 1918 poster (also commonly misdated 1917), Harry R. Hopps’ Destroy This Mad Brute, heightened German cruelty through a racist depiction of an animalistic Hun carrying a defenseless woman—i.e., treating her rough. What we may be seeing here is the deployment by the Tank Corps of a popular comical phrase about gender relations to downplay American brutishness in a modern and total war of great ferocity. And, unlike Germans, Americans were peaceful until provoked: as the Tank Corps explained its symbol, “a cat is peaceful enough if not molested. But let him be crowded a little, or kicked around a bit, and the sizzling, wild-eyed fury of the cat is typical of the feeling the ‘Black Toms’ have for Germans” (“War’s Great Weapon–The Tank,” p. 47).

American propaganda’s success depended on knowing with what popular knowledge Americans encountered images as well as countering anti-patriotic images. When it came to the actual brutality of war, American propagandists defended the actions of the nation’s fighting men. “Treat ’em rough” both acknowledged and forgave men’s actions, a humorous acknowledgement of supposed innate masculine behavior, especially when it came to the physical and social treatment of women. If women provoked boorishness in men, they deserved it because they knew what men were. Germans provoked a world war, and they deserved what Americans were going to give, especially through the destructive machinery of tank warfare. Nevertheless, propagandists distinguished Americans’ necessary cruelty from the wanton brutality of the Germans, arguing that the savage “Huns” were destroying civilization and Americans had entered the war to save it.

Artists produced for the new United States Tank Corps several of the most “modern” poster designs. Hutaf’s design was followed by a black-and-white recruiting poster featuring a large black cat jumping out from the upper left corner, seemingly following the tanks climbing the low horizon line at the image’s bottom. This is just a cool design I wanted you to see. All the Tank Corps posters warrant more study.