And They Thought We Couldn’t Fight!: Some Notes on How Propaganda Posters Work

Five months after the Armistice, Americans were still seeing in public places and in their newspapers images of World War I. George Creel and his Committee on Public Information had successfully sold the war to Americans, but payment in full had yet to be made. In late 1917, during the Second Liberty Loan campaign, President Woodrow Wilson had implored Americans to give to protect the nation’s fighting forces: “Shall we be more tender with our dollars than with the lives of our sons?” Now, after the war’s end, the government would utilize triumphant victory as a theme to ask Americans to give.

Of the five posters advertising the Victory Liberty Loan, that by Victor Clyde Forsythe fits perfectly this theme. The poster features a wounded, smiling American soldier shouldering a rifle, carrying three German helmets as trophies, and leaving a no-man’s land behind him. The poster’s title, And They Though We Couldn’t Fight!, are the words of an underdog in triumph, an “I told you so” retort to German underestimation of American military strength (and civilian commitment).

How did Forsythe’s poster “work” as propaganda? The more-or-less standard definition of propaganda is that it is a form of information, usually of a biased or misleading nature, used to persuade, promote, and publicize an often political cause or point of view. Propaganda appeals to the emotions to register its message and solicit action in its viewer or reader. It does so by employing images that work as a shorthand reinforced across media and in associated activities.

Let’s consider some aspects of this poster.

The German Army’s spiked leather helmet, the Pickelhaube, was a potent symbol in American propaganda, used by many poster artists during the Great War to reference both the German Army and the dreaded Hun. Viewers of Ellsworth Young’s 1918 poster, Remember Belgium, recognized the silhouette of a German soldier by the distinct shape of the Pickelhaube.

Forsythe drew the Pickelhaube as a baseball ready to be struck by baseball uniform-wearing Uncle Sam in an April 1918 Leslie’s cover, even though the German Army had abandoned its use as headgear, adopting in its stead metal Stahlhelme before the United States entered the war. Now that the German Army was no longer a threat, Forsythe’s rendition of German helmets in this poster is a hybrid of both forms of German helmets, interestingly representing the shift in these objects from fear-inducing and evil symbols to trophies of victory. 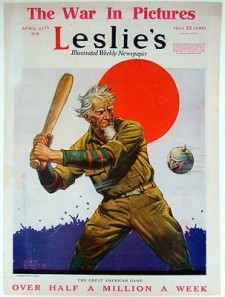 These helmets had three-dimensional physical referents. The United States government secured a large number of German helmets (not a few liberated from a German factory), at the end of the war. These were given away as prizes during the Loan drive, so Forsythe’s visual referent serves as a useful tie-in to local Loan activities through the nation.

Forsythe, who had trained w/he Impressionist artist Frank DuMond, used freely and loosely brushed color, employing DuMond’s “prismatic palette” to imitate plein air painting in the post-battle background. We even sense the battle’s smoke rising from the battlefield behind the soldier’s feet.

Impressionism, as an art movement and style, emphasized (among other aspects) freely made, thin, and visible brush strokes, color over line, the depiction of light and light’s changing qualities, unusual angles of vision, and movement as both human experience and perception. Each of these traits are evidenced in Forsythe’s poster; with the soldier’s jubilantly candid pose, the entire scene appears emotionally immediate.

Who is the model for the depicted soldier? The Los Angeles Times reported of April 27, 1919,  that United States Marine Corps Sgt. Gordon R. O’Neill, wounded at the Battle of  Château-Thierry and the youngest American recipient of the French Légion d’honneur, served as Forsythe’s model.

This may have been an error. Earlier, on April 15, 1919, the San Bernardino County Sun had printed this image (below, left) of Sgt. O’Neill, in which the young Marine imitates the stance of the victorious soldier in Forsythe’s poster. O’Neill served as a speaker on one of the Victory Loan’s trophy trains, a whistlestop tour to elicit bond buying.

A fictional war hero imitated by real war hero lends verisimilitude to the poster. Poster artists and poster models did sell the war–see, for example, James Montgomery Flagg painting Tell That To The Marines! in front of the New York Public Library, on August 1, 1918, as part of a recruitment drive. (I’ve written about another model, a civilian, whose poster was so well received he joined the Victory Loan campaign as speaker.) 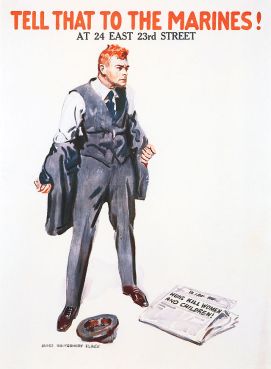 James Montgomery Flagg, Tell That To The Marines!, 1918

Artist Flagg painting a “mammoth” image of his poster in front of the New York Public Library, August 1, 1918

And They Thought We Couldn’t Fight was intended for other audiences: defeated Germans and members of the American Expeditionary Forces remaining in Germany. The poster was mentioned in news accounts of posters sent to Pershing for use, extending to occupied Germany the “battle of the fences” begun by the Committee on Public Information.

Nevertheless, it was likely that the poster’s appearance in Germany was less a tool of propaganda to persuade the defeated Germans. Rather, the news photograph of the poster’s installation reinforced the message to Americans of their hard-fought victory and the need to “finish the job” by bringing “the boys” home.

Forsythe painted impressionistically to appeal to viewers’ emotion while conveying potent symbols to the viewer–symbols that were reinforced in other media and activities. A war hero made Forsythe’s image “come to life,” verifying the image as true as he gave speeches about his heroism. The physical locations of the poster, too, served as tools of persuasion–in this case, rewarding Americans for their sacrifice with the satisfaction of victory. We often study poster images by divorcing them from their contexts and usages, thus missing some of important and immediate ways these posters “worked.”