As I was researching what would become the exhibition War and Speech: Propaganda, Patriotism, and Dissent in the Great War (Michigan State University Museum, 2017), I followed the advice of a grad school colleague and didn’t first immerse myself in the pertinent literature. (Historians tend to do that a lot.) I wanted to investigate the nearly 500 World War I posters in the Museum’s collection without others’ interpretations persuading me to categorize a given image as representative of this or that artist, theory, etc.

This last question comes pretty naturally to a curator, who must attend both to ownership provenance and to an object’s physical properties for safe handling and storage. Provenance reminds us that an object may have had different owners and could have been put to different uses and possess different meanings through time. The object’s physical properties tell us about creation, from the raw materials taken from the environment, refined for specific uses, used by hand or by machines (reflecting technological thinking), and affecting the environments in which it was placed, used, and eventually saved. (Igor Kopytoff’s “The Cultural Biography of Things: Commoditization as Process” is a must-read.)

The need for cataloging the Museum’s World War I posters provided the opportunity to work from each poster to generate questions. For example, I was enamored with C. B. Falls’ poster for the American Library Association, Books Wanted. The background is so dark and the colors used generally complementary that what stands out is the pinkish-white Marine’s face, the white pages and orange bindings of books nearest  his face in the stack of books he holds, and the poster’s white text and border. My first question: all artists consider light and many consider lighting in which to view a given artwork, but did this poster artist do so? Sunlight, for fences and shop windows? How extensive was electric lighting if the poster was displayed in an interior, such as a post office or a library?

I’ll get back to you on that and on Charles Buckles Falls’ World War I poster work, which I find so cool. But let’s state that any research project is, at its beginning, a “crudely drawn big idea.”

As I’ve noted elsewhere, poster contests were popular even before the Great War, part of the wave of mass consumption and advertising reshaping American culture at the turn of the nineteenth century.  During the war, military recruiters and war-related philanthropic associations turned to art schools for poster production through well-publicized contests. I believe that two paintings on Masonite in the Michigan State University Museum are the results of a contest held in Three Oaks, Berrien County, Michigan, though I need to confirm that with more research. Each painting’s theme and imagery imitated posters already being posted and viewed. As I work through newspaper accounts of these contests, specific wording (such as “Food Will Win: Don’t Waste”) was required while originality was sought in the visual imagery. Even then, total originality may not help in building a widespread patriotic message.

My latest (re)discovery of a long-lost artist was made as I work through digitized newspapers. This is the sort of research that was much, much more difficult to do before digitization and public access. I can survey hundreds of newspapers in less time than it used to take me to read just one number of one newspaper, either the crumbling original or on microfilm.

What I am finding “fills in the blanks” of information about many World War I posters, from artist and model and date to the particulars of a poster’s coming-into-being—its biography. The traditional assumption that that the Committee on Public Information (CPI) and its Division of Pictorial Publicity oversaw if not all, then the great majority of poster selection and production, is undermined by this newspaper research. The nation’s newspapers cooperated enthusiastically with the CPI, and the CPI planted stories about posters and their artists to elicit patriotic interest. This alone may have interested editors in covering student patriotic activities. 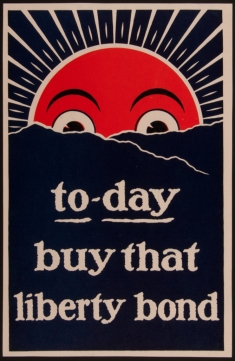 To-Day—Buy That Liberty Bond (above, left) was the poster chosen by the New England Liberty Loan Committee to serve as the region’s official Fourth Liberty Loan poster in the fall of 1918. Just three bold colors—a deep, deep blue, a rich orange, and a stark white—are used to create a stylized landscape of a sun rising behind mountains. The anthropomorphized sun has eyes looking directly at the viewer. (We’ve seen those direct eyes in other posters.)

The original version of this poster (above, right), created for the Third Liberty Loan drive (April-May 1918), lost in a contest sponsored by the Woman’s Liberty Loan Committee for the Gloucester, Massachusetts, public schools. The poster didn’t even win an honorable mention. Yet it was submitted to the New England Liberty Loan Committee’s publicity chair, who saw in the “crudely drawn” poster the “big idea” for the Fourth Liberty Loan campaign.

The poster’s artist was a ninth-grader named Kathleen Walsh (1903-1989). Luckily, we have her image, featured in the Boston Globe on September 23, 1918. If romanticization is a form of persuasion, her story, too, was propagandized: she was a fisherman’s daughter who lived “in a tiny house remote from everything but the sea with the fields and dark pine woods behind.” In a news article reprinted in about a dozen of New England’s newspapers, we learn that the work of great artists stand next this contribution by “this small fisher lassie whose whole life has been spent communing with the sea that now rolls between her home, proud with its service flag in the window, and her brother ‘Over There.’” (For the record, this is correct: Kathleen’s older brother Warren P. Walsh served as a private in Company E, 315th Engineers, U.S. Army.)

Walsh’s original text appears to be is based on a Second Liberty Loan poster created by Eugenie De Land (1872-1961), then an art teacher in Washington, DC, schools. De Land’s original drawing (left) is at the Library of Congress; the published poster (below) features simpler and bolder image and text. Getting the message across to a mass audience needn’t require originality but did require boldness. 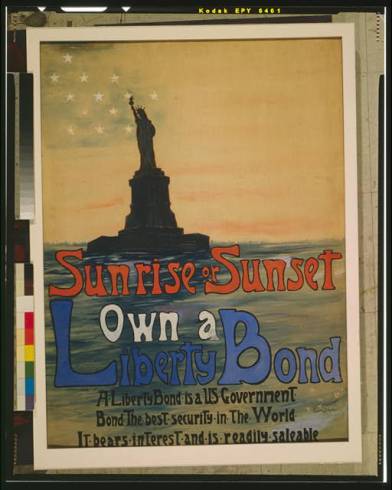 It’s interesting to note how many women competed in and won these poster contests. I’m finding more every time I dive into the newspapers. And I’m curious about the processes by which these (and other) posters were edited and redrawn. I haven’t (yet) uncovered any evidence on that score.

The Committee on Public Information, I believe, learned from and corralled the practice of school-based war poster contests as a means of promoting patriotism. The end result was a 1919 Victory Loan contest for schoolchildren’s posters, some of which may be seen in this news photograph (below). There’s a larger story about the lives and work of propaganda posters in the United States during the Great War.